We’re collating volunteer info packs so we must be getting close to race weekend!

The very final preparations are being made. After a surprising but not that hard to handle last minute course change due to some Manitoba Hydro construction on the floodway we’re back on track with getting the final info together for volunteers, racers, and medics, and the local media has been asking for sounds bites these last few days; a sure sign that things are about to kick off.

Good luck with final preparations to all competitors! We look forward to seeing racers at the start line and volunteers out on course and at our CheckPoints and finish line very soon. 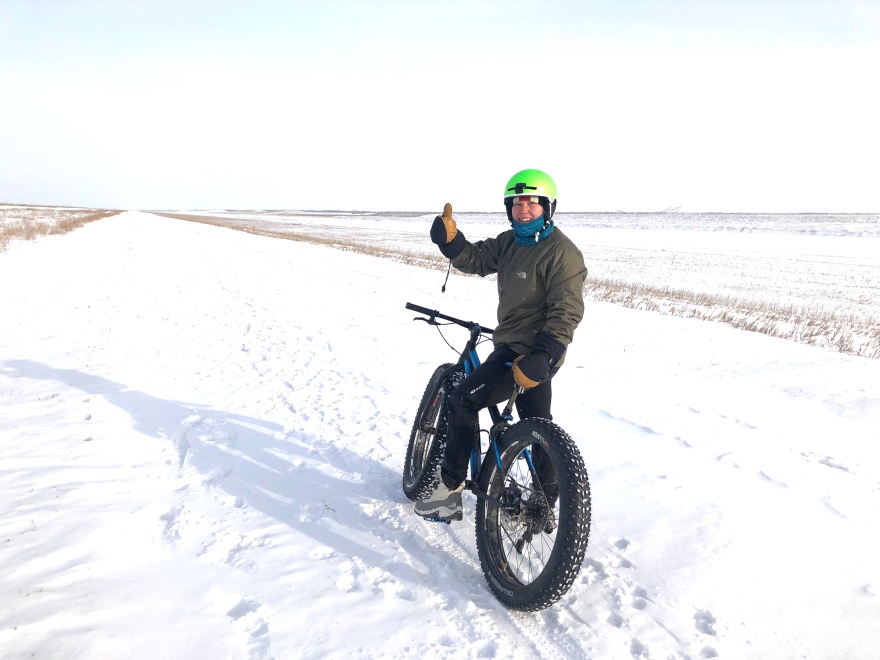 We’ve been fairly quiet (okay very quiet) with our blog posts, but that’s because we’ve been working hard on all the little details that hopefully make for a great race. Oh, and we occasionally get on our bikes or go for a run too 🙂

Final course recons are now finished, and many, many details have been checked off the to-do list. We have volunteers covering all CheckPoints and Roving duties, the Checkpoint facilities are all ready to receive us, racer bib numbers and toques for racers and volunteers have arrived, lots of info including our final race routes for all disciplines are now posted, we’re compiling all of the racer data now that registration has closed so we can print out start and course check sheets along with other volunteer instructions, our timing system is up and running, and on an on.

We’ve also settled on using Twitter as our Race Weekend platform to report on the race in real time (in addition to our live online Leaderboard and Results sheets), and have embedded the Twitter feed on this site, though you can also use your own app to follow along and even to mention us in your tweets so we can retweet updates and comments directly for you.

Overall things are coming along very well this year and we’re really getting excited. Just over a week to go folks!

Well it’s the beginning of December so we figured it was time for an update. Planning is going well (dare we say the smoothest ever?).

Most of our volunteer duties and CheckPoint assignments are covered. We need just a few more people stationed at the Finish Line at various times and we need a few more on-course rovers, but we’re confident that we can fill those spots too. If you know of anyone who would still like to help let them know to contact us at ActifEpica@gmail.com

Insurance has been obtained, permits are in process, the medics have been hired, and CheckPoint venues are all secured for 2020 too. Yay!

The Specator’s Guide went live a week or two ago, and although we may add a bit more info as time permits we hope that the Guide can already help with a general understanding of the race and course layout. The Race Bible is almost completely updated for 2020, including a listing of gear check and pre-race meeting times and locations.

Continued recon of the course will be happening this coming weekend as we nail down the very specific course directions between CheckPoints with the hope of adding some frozen Rat River sections for the long distance racers; GPS course info and related cue sheets are almost all that is left to post on this site, but the unseasonably warm weather has delayed checking out the feasibility of some terrain for now.

Posters will be going up around town this week, sponsors are being spoken with now so we have draw prizes to award people, a new toque design is being worked on (everyone gets one free for entering or volunteering), medals are being made for all finishers, and on and on!

We’re just over 10 weeks from race weekend as this is typed so now it’s time for the participants to put in some training! (well, and register now if you haven’t already, to take advantage of early bird savings).  We’re getting stoked and we hope you are too!

Here we go!…well, with planning race weekend at least.

Actually, plans are already well underway for 2020 and we’re far enough along that we’ll be posting a lot of new info on this site this week. We also hope that the registration will be open by the week following Thanksgiving.

Our biggest news this year is a significant course change, sorta. We’ve struggled with managing the highly variable nature of our southernmost course sections for the longest distance events in the last few years. From Emerson to Senkiw can accumulate so much snow that the course can become almost impassible. Last year many, many hours were spent packing down the snow in the days immediately preceding race weekend in those areas and the conditions still added hours onto our projected race pace for many participants. We want the course and the event to be a challenge, but there’s a balance, and Emerson to Senkiw can sometimes throw the race out of balance.

So, this year we’ll be doing an out-and-back event starting and finishing at the Forks. The longest distance cyclists and runners will turn around at St Pierre and Crystal Spring respectively, spots our return participants will be familiar with. The classic distance turn around will be Niverville, another location we’ve used for years, and the shorter distance turn around will be a new checkpoint on Frasier Road just east of St Mary’s and just north of the Floodway.  We’ll still be following the Crow Wing Trail for much of the race as in years past, and will keep total distances and finish times similar to previous years. For the longest distance cyclists we’ve substituted the interesting terrain around the Senkiw suspension bridge with a ride on the Rat River between Crystal Spring and St Pierre (assuming favourable conditions of course). We hope to expose the longest distance runners to a part of the Rat River as well.

Niverville, Crystal Spring, and St Pierre have become our ‘premium’ checkpoints in recent years with food available at each of these stops, so we’re excited to feature all three in this year’s race too.

An out-and-back event means we can dispense with shuttling athletes and bikes to southern race starts, which saves participants a bit of money and also means more convenient start times in some cases. Further, it means we’ll be able to expand our pre-race bike check to a day or two before the race for people who want to get that done early and now don’t need to bring their bike to the Friday pre-race meeting to load it onto the shuttle.  Lastly, but of equal importance, it means our volunteers won’t be quite as far afield on race day. We’re happy to reduce their burden any way we can.

Most of the rest of the race will look and feel the same as in the past. We’ll have much more info posted here hopefully within the week (by Thanksgiving) but if you have any questions before then feel free to email us at actifepica@gmail.com anytime.

Below is a very preliminary course map, subject to changes, meant to give you a basic idea of where the route will take you. Much more detailed course info coming soon. 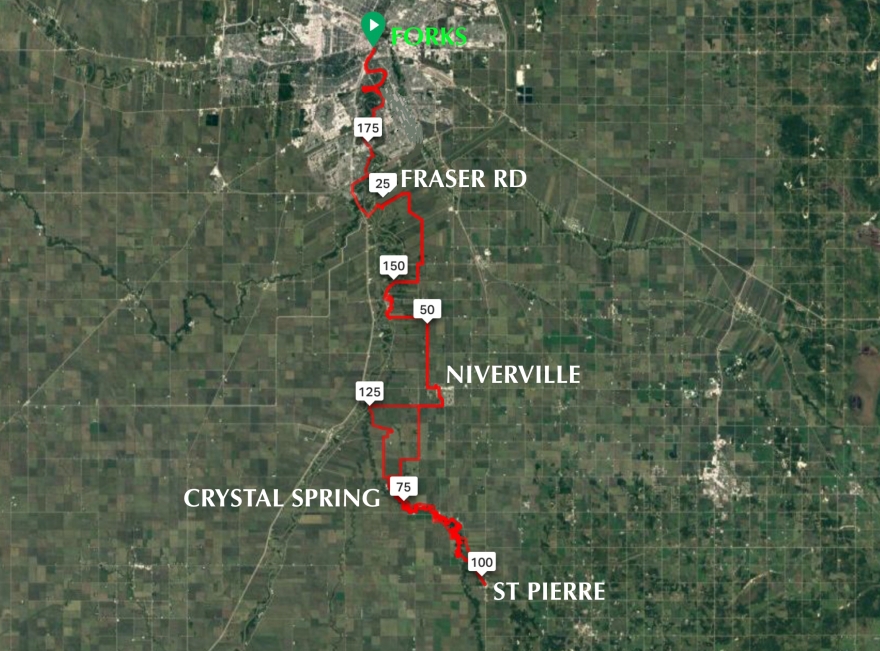 Go to our LiveBlog page and follow the links to our blog, live results (in and out of each CheckPoint) and GPS tracking for participants who have shared that info with us! 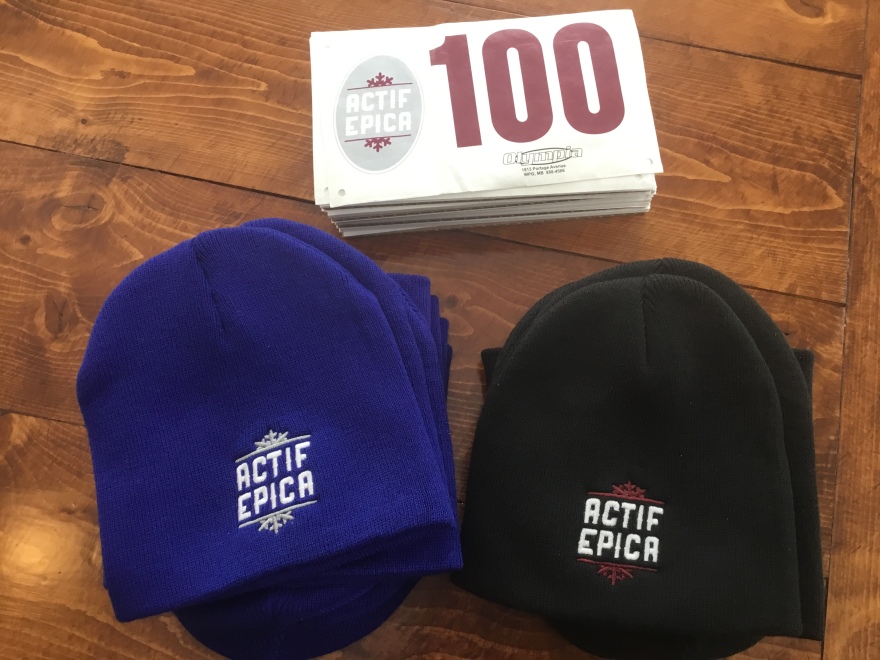 They’re ready to hand out! We have race bibs and toques (participants get black, volunteers get blue) in hand and ready to give out at our pre-race meeting. Everything turned out nicely.

With just over a week to go we’re concluding our final official committee meeting for 2019. Still lots of ‘race week’ stuff left to take care of; with registration now closed we can assign bib numbers and produce CheckPoint check sheets, populate the timing system, etc., and we have to put together an instructional video for the volunteers, do a big poster and information sheet print job, and so on, but we’re on schedule and looking foward to another successful race.

The draw prizes have been gathered, the volunteers are all assigned (THANK YOU VOLUNTEERS!), the CheckPoint facilities are all good to go, and the course is GPS’d (is that a verb?) BRING ON THE RACE!