Note: Race participants should use the official Cue Sheets and GPS Maps posted in the Race Bible to navigate, NOT the maps and info in this Guide.  There are often reasons beyond our control to make last minute changes to the Cue Sheets and GPS, and we’ll let all participants know at the pre-race meeting if we’ve made changes, but we may not have the last minute opportunity to make changes to this Guide.

The full course map below is simply a screen grab of a rough draft. It’s not meant to be used for navigation or as a final copy. Edits are likely before we publish the final, official GPS’d map and related cue sheets, but this map should give you a general idea of the route and CheckPoint locations, even if some of the route specifics change a bit before race weekend. 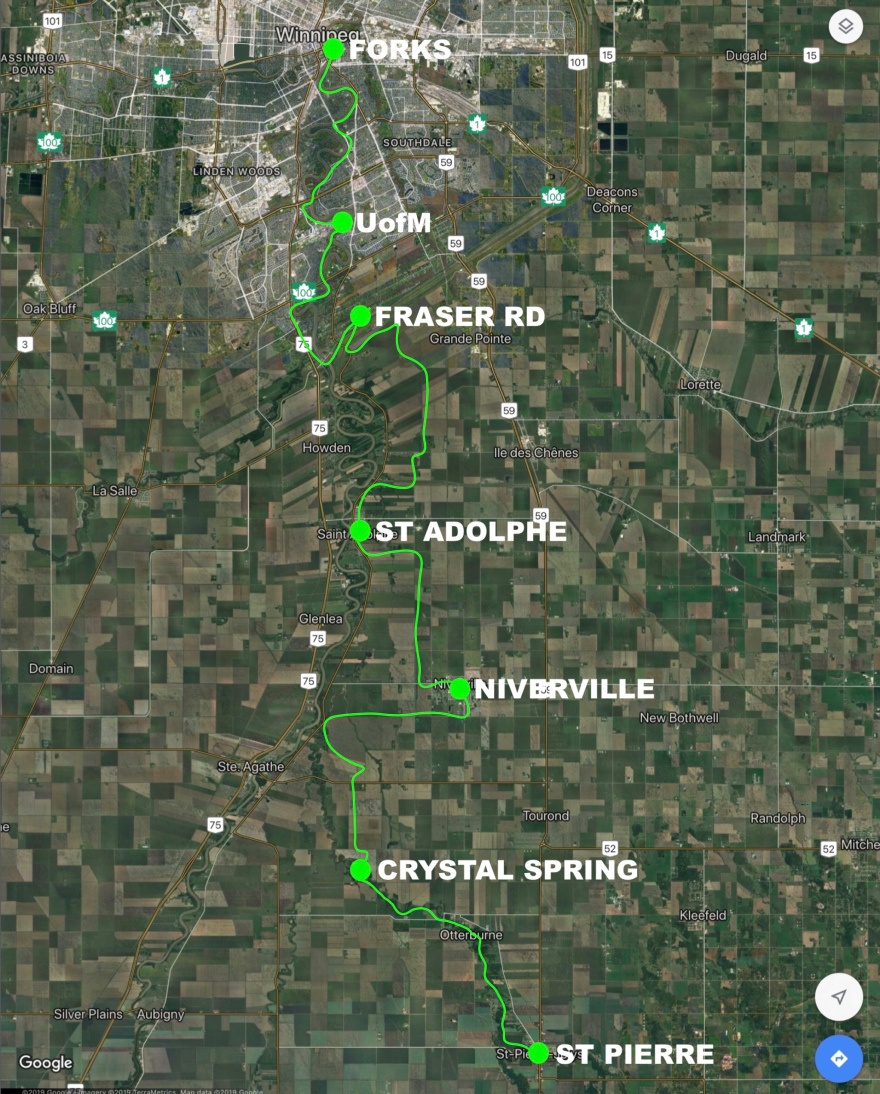 The Forks, sponsored by The Forks – Start Line

We have a new race start location for 2020! All distances and disciplines start at The Forks, to begin a new out-and-back race format that keeps us out of the more problematic southern sections of the longest distance events in recent past years.

Gear Check, race start, and the finish line will all be located just a bit north of the main Forks building, at the CN stage. Volunteers will be located under the stage where you’ll end your journey.

From the beginning of your race at The Forks you’ll head south along urban trails and, weather permitting, the Red River itself as you avoid most roadways and experience some surprisingly good riding and running right in town. You’re headed to the Floodway area and a new CheckPoint on Fraser Road.

Distance between The Forks and Fraser Road CheckPoint for all participants: 30km 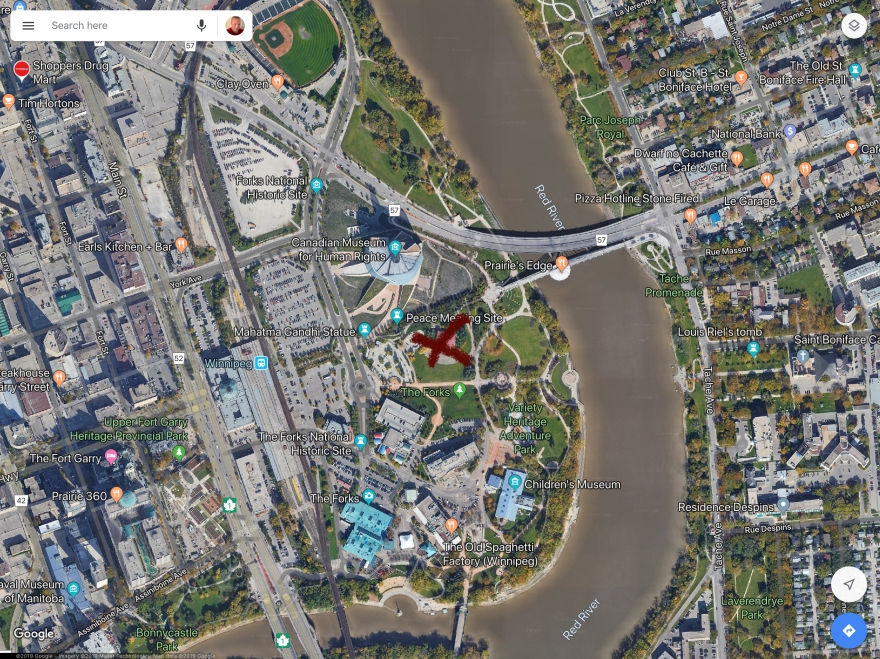 Fraser Road, sponsored by the Manitoba Association of Trail Runners – Turn Around for Short Distance Bike and Run

Just north of the Floodway and just south of Winnipeg we encounter our 1st CheckPoint, new for 2020, on Fraser Road. Volunteers from a local trail runners group have graciously adopted this checkpoint and will be stationed inside a winterized tent or shed, with a portable toilet nearby.

You’ll likely make a quick stop here as you either prepare to turn around and head back north to the U of M CheckPoint (short distance racers) or carry on further south (mid and long distance racers) to the St Adolphe CheckPoint, but not before taking a quick bite from the available grab-and-go food provided by the trail runners group (note though that water may not be available here because it’s an outdoor facility and keeping the water from freezing is problematic).

Racers heading south will quickly cross the Floodway and, depending on weather conditions, may quickly find themselves on formidable ground as the next section is often windblown and thick with snow. Or, on light precipitation years it could end up being a fast gravel section. We’ll know on race day!

Distance between Fraser Road and U of M Checkpoints for Short Distance participants: 12km 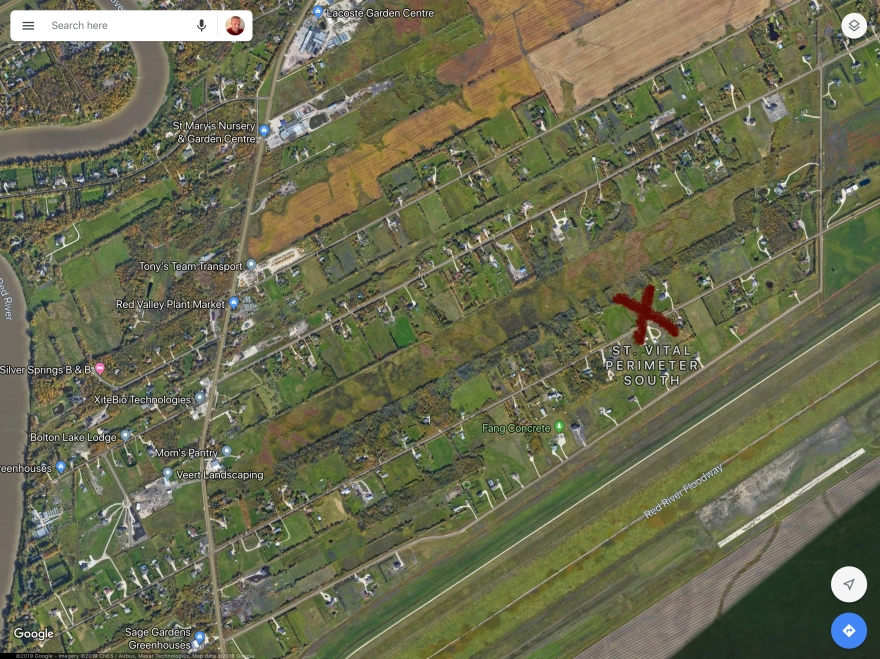 The Curling Club on the south side of St Adolphe houses are next CheckPoint.

Mid and Long Distance racers will file through this area along the berm that protects the town in cases of severe Red River flooding as they continue south to Niverville. Conditions are usually decent on this next stretch unless there’s severe wind or cold. 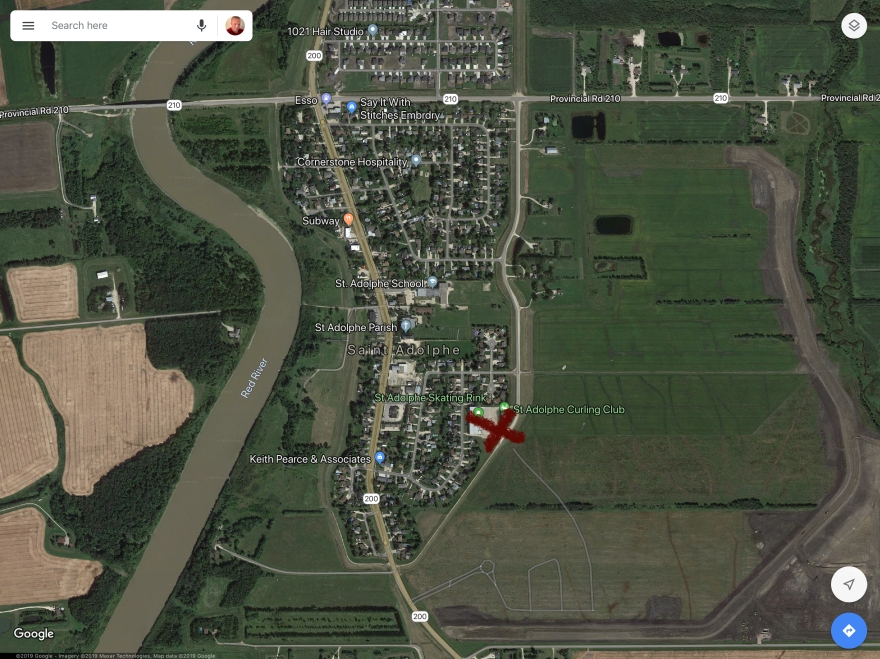 Niverville – Turn Around for Mid Distance Bike and Run

The approach to our Niverville CheckPoint will likely be different than in recent years due to road and infrastructure changes in the area but the facility itself remains the same, and so does the warm food provided inside! Well, the food itself my vary from year to year but you can hopefully find some extra nutrients inside if that’s what you’re after.

Some racers stay at this CheckPoint a little longer and regroup before either heading back north (Mid Distance racers) or continuing south to the furthest points of the course (Long Distance racers).  A fair amount of open prairie awaits those who continue south. 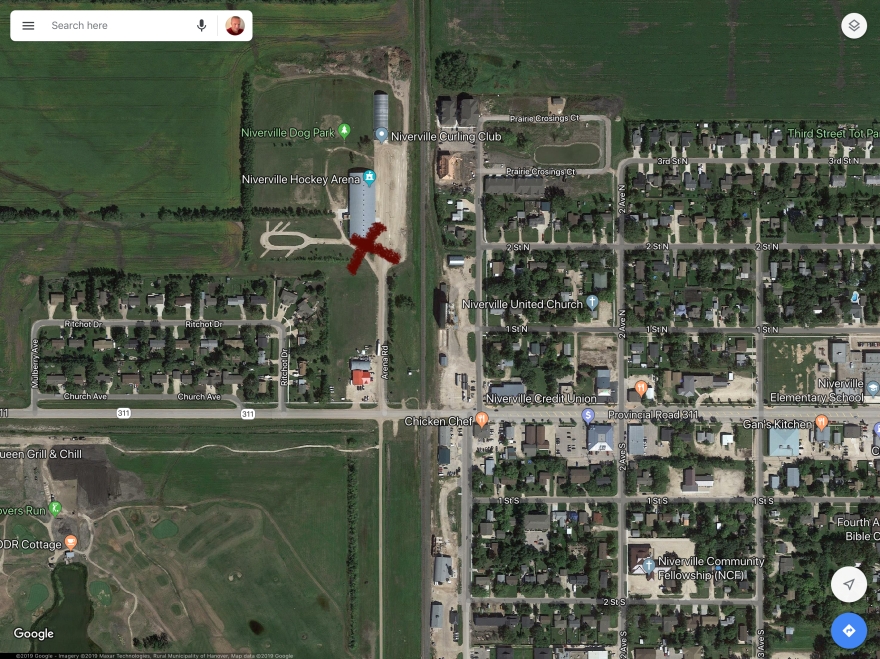 The Crystal Spring Colony welcomes the Long Distance racers to one of their facilities where they typically offer some munchies before runners turn around and head back to Niverville* and cyclists carry on to St Pierre.

*Note that the Long Distance runners may actually head a bit further south than Crystal Spring too, likely along a part of the same route the Long Distance cyclists take, in order to travel a more precise 162km (100miles) overall – we’ll include this info in our final GPS mappings and Cue Sheets. Update Feb 3rd: We’ve confirmed that the 162km runners will have a 5km out and 5 km back (10 km total) section on the Rat River south of Crystal Spring).

The Colony manufactures and sells Black Earth Grills, and though it’s not a guarantee they’ve been known to share some grilled meat with us on occasion 🙂

South of Crystal Spring the course topography changes as, weather permitting, we take to the tree lined Rat River for much of the most southerly section of trail. If we can’t travel on the ice we’ll be riding more or less beside the river on lightly driven rural roads. 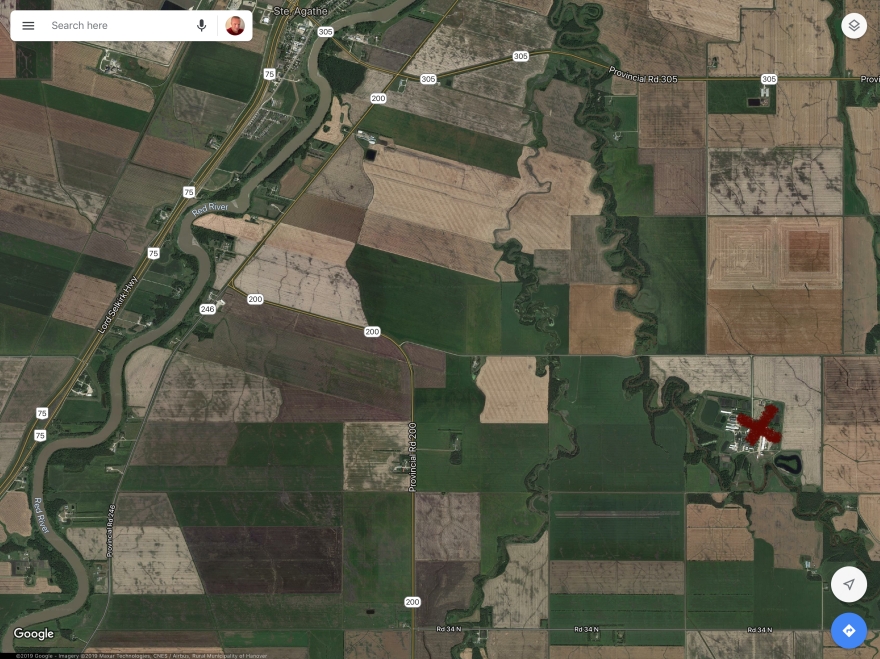 We’ve made it to our most southern CheckPoint, in St Pierre, where members of the Crow Wing Trail Association host the Long Distance cyclists as they hit the half way point of their event.

This is another CheckPoint where volunteers have historically been gracious in offering racers some hot food, though you need to make sure you’re self sufficient because we can’t count on external food sources.

Depending on race weekend conditions the Long Distance cyclists will head back north either along the same river route or along nearby roads. We may in fact decide that racers take the river one way and roads the other in order to tweak the distance and target finish times so pay attention to changes in the GPS mappings and Cue Sheets we provide, and at our pre-race meeting! 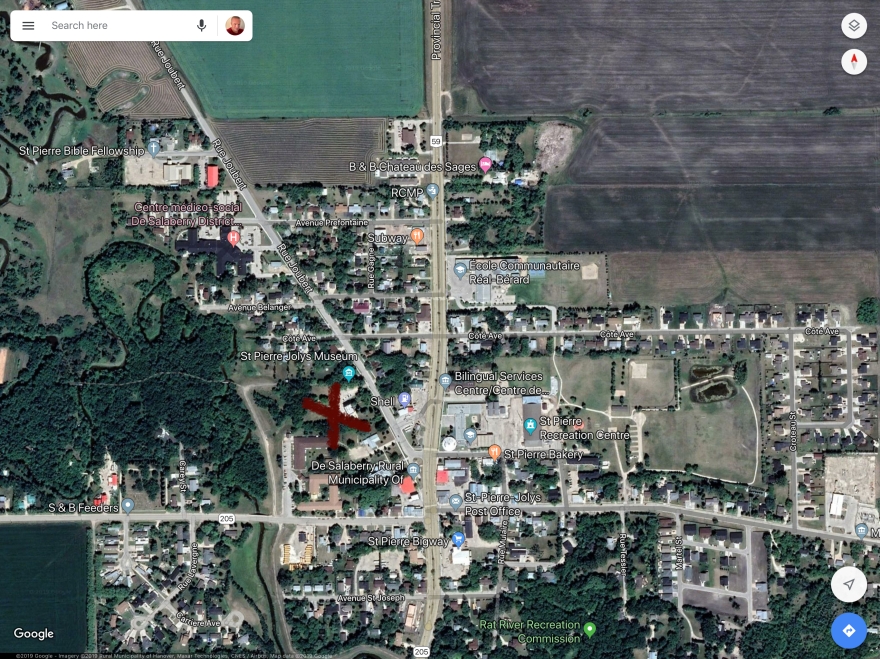 On the way back from St Pierre the Long Distance cyclists will ride along or beside the Rat River again as they begin retracing their route north. Let’s hope for favourable conditions to ride at least part of the race on the river because it’s really quite a picturesque part of the course.

Approaching Niverville from the south

As the Long Distance Cyclists and Runners approach Niverville for the 2nd time, this time from the south, they first pass through a park on the south side of town.

This is the last time you’ll see food at a Checkpoint, before carrying on to St Adolphe.

All but the Short Distance racers will traverse the St Adolphe berm one more time as they approach the related CheckPoint at the Curling Club.

From there we skip the Fraser Road Checkpoint we used on the way south near the beginning of the race (but otherwise follow mostly the same race route) and instead make our 2nd last stop at the U of M Active Living Centre. This means we’re getting closer to the end of our rural experience and will soon(ish) be back in civilization, but not before retracing the sometimes challenging section up to and including the Floodway.

Distance between St Adolphe and U of M Checkpoints: 28km

U of M, sponsored by the Active Living Centre, Faculty of Kinesiology and Recreation Management

Almost there! This is the last stop for all disciplines and distances as we’re now well and truly back in the City.

The U of M Active Living Centre is usually a quick stop for racers as they make their way closer to the finish line. From here it’s back onto a lightly traveled (for the most part) urban route that eventually takes you alongside or on top of the Red River as you make your way to the City Centre and The Forks.

Distance between U of M Checkpoint and Finish at The Forks: 17km 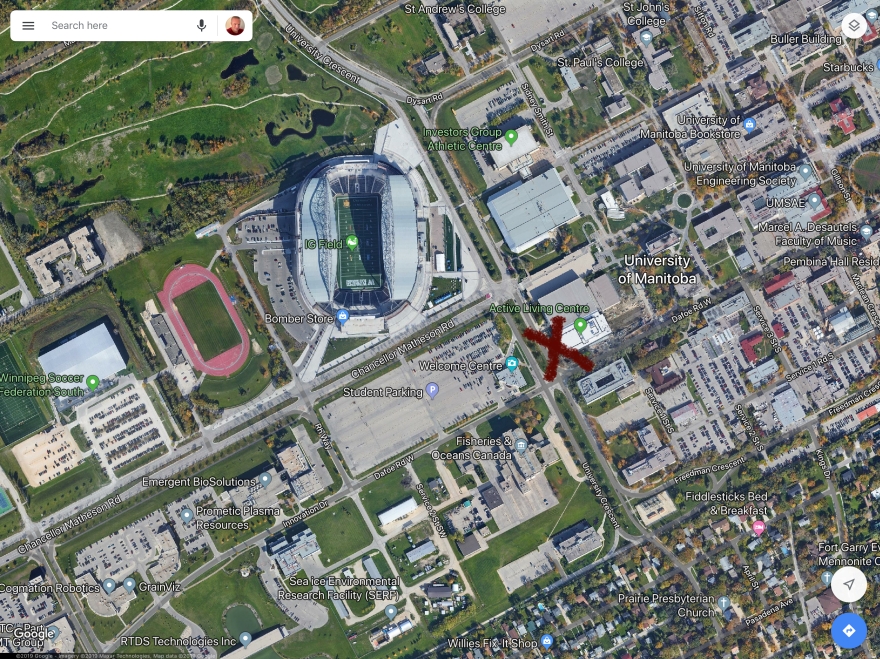 You made it! Well, almost anyway. This is the home stretch as you reach the Forks and then find your way along a path near the river to run or ride east and north of the CN Stage as you approach the Finish and our Headquarters from behind, just as you left it hours or even days earlier.